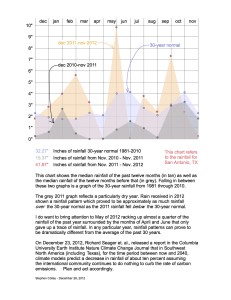 At the end of 2012, Richard Seager and others at the Columbia University Earth Institute released a paper describing their findings based on climate trends and forecasting models. The report says that in many areas of the Southwest, including Texas, winter precipitation will decrease through the year 2040. This is particularly problematic for snows in the cascades which is a major source of water for irrigation as well as potable use in California from snowmelt. In Texas, drier winter and spring soils also cause problems due to less surface water and moist soils available for evaporation which in turn provides upper level moisture necessary for rainfall. In summary, the report suggests that Texans should expect about a ten percent drop in precipitation through 2040. We can expect dry years like what we experienced from late 2010 through late 2011. Prudence would dictate that we adjust our use of water and expectation of water sources accordingly. For those of us who are planning to install a rainwater harvesting system, I suggest an increase in both the collection surface area and cistern capacity would be in order. In rural areas, rainwater cistern planning should also design for an emergency fire supression reservoir (which could be the lower section of one of your cisterns) complete with a fitting similar to a fire hydrant fitting that will be compatible with your local volunteer fire department equipment. Droughts are likely to provide ideal conditions for wildfire, so having a fire supression reservoir could make the difference in saving your property.